A conversation with Andy Clarno regarding his book, “Neoliberal Apartheid: Palestine/Israel and South Africa after 1994.

Tell us about the book and how you arrived at researching inequality, poverty, and securitization in South Africa and Palestine/Israel after 1994?

I’ve been spending time in Palestine since 1996 and South Africa since 2002 as both a scholar and an activist.  During my initial visits to Palestine, I became interested in the neoliberal visions that shaped the Oslo “peace process” from the very start.  My first visit to South Africa was inspired by the 2001 World Conference Against Racism in Duran, South Africa.  The conference played an important role in popularizing comparisons between the two states – with an emphasis on the undeniable similarities between the apartheid systems in South Africa before 1994 and Palestine/Israel today.  When I arrived in Johannesburg, I began working closely with social movements that had risen up in the late 1990s to challenge the neoliberal economic policies of the post-apartheid government led by the African National Congress. It soon became clear that there were two shortcomings to most existing comparisons between South Africa and Palestine/Israel: first, they overlooked the limitations of transformation in South Africa after 1994 and, second, they ignored the economic aspects of apartheid by focusing only on state violence. I wanted to build on the existing comparisons, which have been extremely insightful and politically productive, by developing a political-economic critique of Israeli apartheid while also highlighting the continuing struggles of poor Black South Africans in the post-apartheid state.

Neoliberal Apartheid analyzes the simultaneous processes of political-economic restructuring in South Africa and Palestine/Israel after 1994.  The South African state was democratized and Black South Africans gained formal legal equality.  But neoliberal restructuring entrenched the race and class inequalities created by centuries of colonialism and apartheid.  Post-apartheid South Africa is now the most unequal country in the world.  A small black elite has emerged alongside the old white elite, which still controls the vast majority of land and wealth in the country.  But working class Black South Africans confront rising levels of unemployment and the jobs that remain are increasingly precarious.  At the same time, private security has been the fastest growing industry in the country, developing ever more sophisticated approaches for protecting the powerful and policing poor Black residents.

The trajectory of the “peace process” was much different in Palestine.  Israel remains a settler colonial state with an explicitly racist political regime that was recently reinforced by the Nation-State Law. This is why Israel is increasingly – and correctly – recognized as an apartheid state.  It is also important to see that Israel’s settler colonial project now operates through neoliberalism.  Neoliberal restructuring has reduced Israeli dependence on Palestinian workers, transforming Palestinians into a truly disposable population and enabling Israel to carry out its project of concentrating Palestinians into a series of isolated enclosures while aggressively colonizing the land that remains. Oslo also enabled the growth of a new Palestinian elite in the West Bank, while the vast majority of Palestinians confront deepening poverty, unemployment, and repression.  To maintain this regime in the face of constant resistance, Israel has developed sophisticated forms of militarized control. In the West Bank, this includes a system of “security coordination” with the Palestinian Authority.

Neoliberal Apartheid analyzes the relationship between growing inequality, racialized poverty, and these advanced systems of securitization in Palestine/Israel and South Africa after 1994.

What are your overall arguments about securitization in South Africa and Palestine/Israel?

Neoliberal apartheid regimes attempt to address the anxieties of the powerful by deploying advanced strategies for policing the racialized poor.  These strategies increasingly involve networks of private and state security forces.  In Johannesburg, the security networks are defined above all by privatization. Private security companies and residents’ associations are working hand in hand to develop advanced strategies for regulating the presence of poor Black people in wealthy neighborhoods.  In Palestine, securitization is driven by the State of Israel. But the state works closely with Israeli companies developing sophisticated security technology and with an imperial network of security forces from the US, the EU, Jordan, Egypt, and the Palestinian Authority.  In the West Bank, the Israel military and the PA security forces work together to police Palestinian critics of the Oslo process.

Communities that have been most severely marginalized by the transitions of the last twenty years have also become the targets of these networked security regimes, which operate through racialized discourses of “Black crime” and “Muslim terrorism.” While providing the symbolic justification for securitization, the racialized poor also provide the labor upon which securitization depends.  Private security companies have become one of the primary sources of low-wage work for Black South African men and the PA security forces are among the only employment options available to Palestinian men in the West Bank. But with low wages and dangerous working conditions, the labor force is not content. Nor does it escape the workers that they are asked to protect the wealthy and powerful by targeting their own communities. The question of racialized labor, therefore, is one of the most important sources of instability in these neoliberal security regimes.

Can you elaborate on how Israeli-PA security coordination contributes to the racialization of the Palestinian population?

It is important to emphasize that the PA has no real sovereignty.  Israel retains full sovereign control over all of historic Palestine.  After Oslo, Israel imposed a siege on Gaza and fragmented the West Bank into a series of isolated enclosures surrounded by military checkpoints and the massive “apartheid wall.”  Israel uses checkpoints and permits to control Palestinian movement in and out of the West Bank enclaves; invades the enclaves every day to suppress resistance, arrest activists, and assassinate militants; and deploys drones and other military aircraft above the enclosures for surveillance and assault. 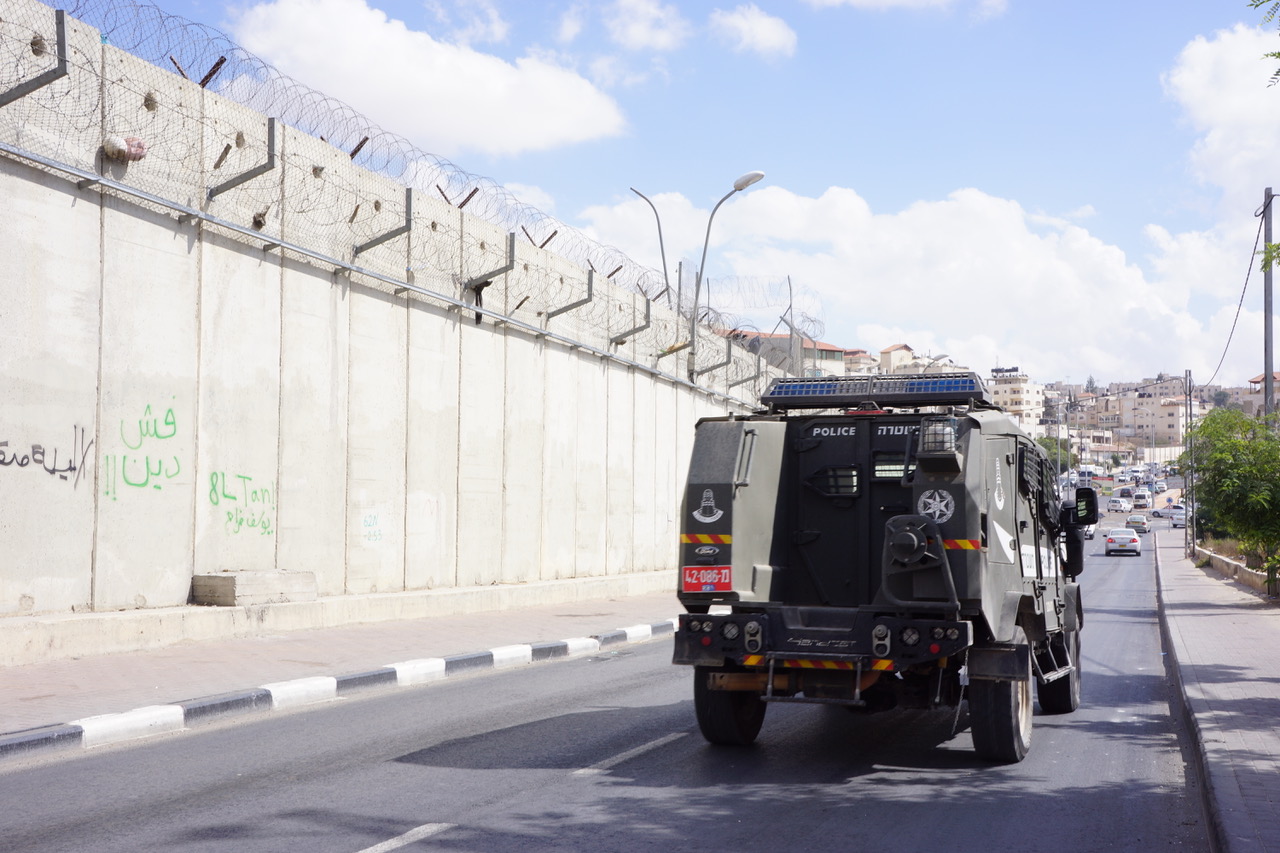 Moreover, the formation of the Palestinian Authority allowed Israel to partially outsource the occupation. Along with its security forces, the PA operates schools, hospitals, and pension funds.  The PA budget depends on a combination of taxes collected by Israel and flows of aid from “donor states” in Europe, North America, and the Arab Gulf.  Israel and the donors use this financial dependency as leverage to shape PA policies.

Flows of donor aid after Oslo also led to a proliferation of international and Palestinian NGOs in the occupied territories. NGOization facilitated the demobilization of the Palestinian grassroots organizations that sustained the first intifada. It also contributed to the growing class divide among Palestinians.  Although most Palestinians confront poverty and unemployment, the West Bank has witnessed the growth of a new Palestinian elite composed of the PA leadership, Palestinian capitalists that serve the occupation, and NGO elites with ties to international donors.

But the relationship between neoliberal colonialization and donor aid is most clearly demonstrated by the elimination of funding for UNRWA, the UN agency responsible for Palestinian refugees. The recent US decision to end all funding for UNRWA follows three decades of calls for budget cuts.  These calls were justified by neoliberal rhetoric about promoting self-responsibility. But the project to eradicate UNRWA is driven by Israel’s colonial effort to prevent the return of Palestinian refugees.

How do both South Africa and Palestine fit into broader global patterns around the commodification of security?

Security is big business in both places, but the business is different. In general, there are two important aspects to the global commodification of security: guarding and technology. South African firms focus on the former while Israeli firms dominate the latter.

South African security companies focus on guarding private residences, businesses, and wealthy neighborhoods.  They incorporate some simple technology – such as perimeter walls, access control, and alarm systems – but rely primarily on the deployment of a massive number of security guards.  Security guards sit near the doors of houses and business, watch boom gates at the entrances of gated communities and business parks, and patrol wealthy neighborhoods looking for people that that their bosses deem “suspicious” – which generally means two Black males. The guarding model has led to a rapid expansion of employment, making private security one of the primary sources of entry level work in South Africa.  There are now 480,000 people working as security officers, with another 1,380,000 people registered as guards and waiting for opportunities in the field.  The vast majority of these jobs involve very low-wages, short term contracts, and difficult – often dangerous – conditions.  This is the basic profit model of the industry, which is increasingly controlled by multi-national corporations such as ADT, G4S, and Securitas.

In Palestine, there is a growing presence of private security guards at checkpoints, settlements, and business.  But the Israeli security industry is much more focused on the development of advanced security technology – including facial recognition devices, pilotless drones, predictive algorithms, and so on.  The industry is based on two interrelated dynamics: neoliberal restructuring and connections to the Israeli military. Neoliberal restructuring enabled the expansion of high-tech companies by facilitating foreign investment and promoting export-oriented businesses.  And intimate connections between the Israeli military and the emerging private sector generated a host of companies run by former IDF officers that develop sophisticated military technology for the IDF.  These companies then market their devices to governments around the world – arguing that they have been tested in military combat and riot-suppression.  As a result, the military occupation has become a profitable market opportunity. And Israeli companies have emerged at the forefront of a multi-billion-dollar global industry for security technology.

How does the privatization of security in South Africa contribute to securitization in Palestine?

There are at least three dimensions to this. First, residential and commercial security in South Africa relies heavily on technology developed and sold by Israeli companies. From motion sensors to video surveillance, Israeli technology is widespread in South African homes and businesses.

Finally, securitization in South Africa is integral to the globalization of security regimes. Just like in South Africa, elites around the world are demanding more protection for themselves and more repression of the poor. Racialized threat discourses that identify marginalized populations as the sources of elite insecurity justify the proliferation of separation walls and checkpoints, police and prisons, security guards and surveillance equipment. Israeli companies have capitalized on this dynamic by exporting advanced technology and by marketing their managers as “experts” in security. In doing so, they have become key players in the global security market.

Andy Clarno is associate professor of Sociology and African American Studies at the University of Illinois at Chicago.  His research examines racism, capitalism, colonialism, and empire in the early 21st century, with a focus on the relationship between marginalization and securitization.  His first book, Neoliberal Apartheid (University of Chicago Press 2017), received the 2018 Political Economy of the World System Distinguished Book Award and the 2018 Paul Sweezy Marxist Book Award.  Other recent publications include “Neoliberal Colonization in the West Bank” in Social Problems (2017), “Rethinking Our Definition of Apartheid” with Haidar Eid in Al-Shabaka (August 2017), “Rescaling White Space in Post-Apartheid Johannesburg” in Antipode (November 2013), and “Securing Oslo” in Middle East Report (Winter 2013).